Rebellion to Tyrants is Obedience to God (Part 1) 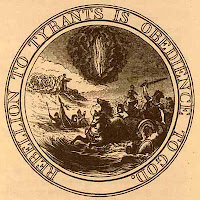 Then Peter and the other apostles answered and said, We ought to obey God rather than men. (Acts 5.29)

"Rebellion to tyrants is obedience to God." -- This famous saying of both Thomas Jefferson and Benjamin Franklin is said to have been on the epitaph of John Bradshaw (1602-1659), a British judge who presided over the trial of King Charles I, when his body was re-interred in Jamaica (where it was taken by his son to protect it from the fury of the Restoration towards regicides).

"Men must be governed by God, or they will be ruled by tyrants." -- William Penn

"Man will ultimately be governed by God or by tyrants." -- Benjamin Franklin

As our nation draws closer to another Fourth of July commemoration of the U.S. Declaration of Independence, I thought it would be worthwhile to trace some of the known or probable influences of history upon the writing of our national Declaration of Independence and to quote relevant extracts [I am cognizant of the fact that Thomas Jefferson was not a professing Christian, and that many Enlightenment influences among the American Founding Fathers of the late 18th century have affected our nation for ill, particularly with respect to the U.S. Constitution, but this series of posts concerns the major influences upon our other national charter, many of which were Calvinistic].

Do we lift up ourselves unto pride, or tell you to be despisers against the powers ordained? Not so. Do ye again who are sick on this point, touch also that border of the garment? The Apostle himself saith, “Let every soul be subject unto the higher powers, for there is no power but of God, the powers that be are ordained of God. He then who resisteth the power, resisteth the ordinance of God.”

But what if it enjoin what thou oughtest not to do? In this case by all means disregard the power through fear of Power. Consider these several grades of human powers. If the magistrate enjoin anything, must it not be done? Yet if his order be in opposition to the Proconsul, thou dost not surely despise the power, but choosest to obey a greater power. Nor in this case ought the less to be angry, if the greater be preferred.

Again, if the Proconsul himself enjoin anything, and the Emperor another thing, is there any doubt, that disregarding the former, we ought to obey the latter? So then if the Emperor enjoin one thing, and God another, what judge ye? Pay me tribute, submit thyself to my allegiance. Right, but not in an idol’s temple. In an idol’s temple He forbids it. Who forbids it? A greater Power. Pardon me then: thou threatenest a prison, He threateneth hell. Here must thou at once take to thee thy “faith as a shield, whereby thou mayest be able to quench all the fiery darts of the enemy.”

* 1100 -- The Charter of Liberties issued by Henry I of England, upon his accession to the throne, made public his voluntary submission to the principle of Lex Rex, that is, that he as prince was under the law and bound to uphold the law.

* c. 1159 -- John of Salisbury, a friend and biographer of Thomas Becket, himself a martyr for ecclesiastical liberty, wrote Policratus, the first modern European justification of tyrannicide.


For myself, I am satisfied and persuaded that loyal shoulders should uphold the power of the ruler; and not only do I submit to his power patiently, but with pleasure, so long as it is exercised in subjection to God and follows His ordinances. But on the other hand if it resists and opposes the divine commandments, and wishes to make me share in its war against God; then with unrestrained voice I answer back that God must be preferred before any man on earth. Therefore inferiors should cleave and cohere to their superiors, and all the limbs should be in subjection to the head; but always and only on condition that religion is kept inviolate.

1. We have in the first place granted to God and by this our present charter have confirmed, for us and our heirs forever, that the English Church shall be free and shall have its rights entire and its liberties inviolate. And how we wish [that freedom] to be observed appears from this, that of our own pure and free will, before the conflict that arose between us and our barons, we granted and by our charter confirmed the liberty of election that is considered of prime importance and necessity for the English Church, and we obtained confirmation of it from the lord pope Innocent III — which [charter] we will observe ourself and we wish to be observed in good faith by our heirs forever. We have also granted to all freemen of our kingdom, for us and our heirs forever, all the liberties hereinunder written, to be had and held by them and their heirs of us and our heirs.

A tyrannical government is not just, because it is directed, not to the common good, but to the private good of the ruler, as the Philosopher states (Polit. iii, 5; Ethic. viii, 10). Consequently there is no sedition in disturbing a government of this kind, unless indeed the tyrant's rule be disturbed so inordinately, that his subjects suffer greater harm from the consequent disturbance than from the tyrant's government. Indeed it is the tyrant rather that is guilty of sedition, since he encourages discord and sedition among his subjects, that he may lord over them more securely; for this is tyranny, being conducive to the private good of the ruler, and to the injury of the multitude.

* August 1, 1291 -- The Schweizer Bundesbrief, Switzerland's national charter, was signed, documenting the Eternal Alliance, or League of the Three Forest Cantons. The signers were known as Eidgenossen, or Confederates, a term that has been proposed as the possible etymological origin of "Huguenot."

* April 6, 1320 - The Declaration of Arbroath (signed among others by Thomas Randolph, 1st Earl of Moray (d. 1332) -- whose uncle was Robert the Bruce -- an ancestor of Thomas Jefferson) was a declaration of Scottish independence from England.

But from these countless evils we have been set free, by the help of Him Who though He afflicts yet heals and restores, by our most tireless Prince, King and Lord, the Lord Robert. He, that his people and his heritage might be delivered out of the hands of our enemies, met toil and fatigue, hunger and peril, like another Macabaeus or Joshua and bore them cheerfully. Him, too, divine providence, his right of succession according to or laws and customs which we shall maintain to the death, and the due consent and assent of us all have made our Prince and King. To him, as to the man by whom salvation has been wrought unto our people, we are bound both by law and by his merits that our freedom may be still maintained, and by him, come what may, we mean to stand.

Yet if he should give up what he has begun, and agree to make us or our kingdom subject to the King of England or the English, we should exert ourselves at once to drive him out as our enemy and a subverter of his own rights and ours, and make some other man who was well able to defend us our King; for, as long as but a hundred of us remain alive, never will we on any conditions be brought under English rule. It is in truth not for glory, nor riches, nor honours that we are fighting, but for freedom -- for that alone, which no honest man gives up but with life itself

I speak only of private men. For when popular magistrates have been appointed to curb the tyranny of kings (as the Ephori, who were opposed to kings among the Spartans, or Tribunes of the people to consuls among the Romans, or Demarchs to the senate among the Athenians; and perhaps there is something similar to this in the power exercised in each kingdom by the three orders, when they hold their primary diets). So far am I from forbidding these officially to check the undue license of kings, that if they connive at kings when they tyrannise and insult over the humbler of the people, I affirm that their dissimulation is not free from nefarious perfidy, because they fradulently betray the liberty of the people, while knowing that, by the ordinance of God, they are its appointed guardains.

Chapter VI. Whether It Be Lawful To Depose An Evil Governor, And Kill A Tyrant.
...
Now for as much as there is no express positive law for punishment of a tyrant among Christian men, the question is, whether it is lawful to kill such a monster and cruel beast covered with the shape of a man. And first for the better and more plain prose of this matter, the manifold and continual examples that have been from time to time of the deposing of kings, and killing of tyrants, do most certainly confirm it to be most true, just and constant to God's judgment. The history of kings in the Old Testament is full of it.

But now to prove the later part of this question affirmatively, that it is lawful to kill a tyrant: there is no man that can deny, but that the ethnics (although they had not the right and perfect knowledge of God) were endued with the knowledge of the law of nature.

For it is no private law to a few or certain people, but common to all: not written in books, but grafted in the hearts of men: not made by man, but ordained of God: which we have not learned, received or read, but have taken, sucked, and drown it out of nature: where unto we are not taught, but made: not instructed, but seasoned: and (as St. Paul says) man's conscience bearing witness of it.

This law testifies to every man's conscience, that it is natural to cut away an incurable member, which (being suffered) would destroy the whole body.